Today I planned on completing the rest of the popcorn ceiling.  I haven’t done too much in the past month or so as I was trying to catch up on stuff at work, but we accomplished what we set out to do and at the end of the day, the popcorn was completely gone!

It is 2:30am and I cannot sleep.  I had a very productive day ending a very productive week.  Throughout this week, I realized that my plans and goals are starting to come together once again and there are many pivotal moments approaching in the coming weeks.  I am constantly amazed by my accomplishments and always striving for that next goal.  Now I am getting close to another triumph where I can walk easy for a bit on a plateau before gearing up for the next climb.  Everything I have worked so hard to achieve over the last 16 years has been steps toward where I am heading.  Often I have tripped over myself to achieve goals and often I made the wrong choice at the fork in the road and found myself having to backtrack.

Next week I am paying final payments on two debts.  In March, I am paying off another and in May two more and then one more in July.  There is almost nothing left of my past business debt compared to where I started three years ago when I shut the businesses down.  I have approximately $12,000 left which may sound like a lot but is so relieving considering where I was when I started.  I still have a ways to go, but I can’t help but feel an eagerness to have these mini celebrations over the coming months as each debt starts dropping off.

I have been diligent in keeping a spreadsheet of goals and debts and income and planning.  Now I can finally feel more of the reality of what it will be like to free up available cash and have only manageable debt remaining such as house, car, student loan.  And then to work toward clearing all of those as well.  Is it really possible to be completely debt free and what might that be like?  I can’t help but become excited about that possibility and thinking about how I can make it a reality.

I have another small section of popcorn to scrape off today and I plan on tackling the small wall that needs some drywall.

I have a water sprayer and a scraper and I am ready to start removing that nasty popcorn ceiling.  I have never done this before, but I have been doing some reading about it online and I think I know how to best tackle it.  I am planning on doing a section at a time so that we can keep our furniture in here and simply move furniture into different sections of the room.

It was a very nice Christmas with family.  Risa, Mom, Lucas and I.  I think it was the smallest Christmas gathering we have ever had, but it was relaxing for sure and the food was fantastic!

The Power of Determination (and a little luck)

It has been a rough couple of months.  I am in the third year of my three year plan to pay off all of my old business debt, however, this requires about 90% of my income every month.  I rely on side jobs and overtime for the miscellaneous stuff like when Lucas needs special shirts for the band concert for school, or when our electric bill is a bit higher than we expected, or doing some home renovations, or even if I just feel like having a beer.  Side money and overtime is my gravy.

These last two months the overtime was non-existent and the side jobs were slim to none.  Even a couple of the hosting customers I have decided not to renew this year because their businesses are struggling.  Then a week ago, a customer who we built a website for a few years ago emailed and asked for an overhaul.  I was thinking, “Cool! It should just take a few hours and maybe I can get paid before Christmas.”.  It did take a few hours and he wanted to meet this morning (Christmas Eve) to review it and after an hour reviewing it, he paid me with paypal and I now have cash for Christmas.

Lucas wanted Steak for Christmas, but we had already bought groceries and spent about $100.  Now that I managed to get some “gravy”, I can get steak for Lucas too!

I know it sounds silly.  Most people think that I should have filed bankruptcy or something, but I have been determined to pay off all of that debt and it isn’t fun and it sometimes sucks when I realize I have ten dollars left to my name and payday is a week away, but I am over two years into a three year hard core plan to pay off huge debt and these next 7 months is the last hill before I can breath and know that I did it.

But for now, it is Christmas Eve and my son is going to have his steak!

I sent him a Christmas card with a gift card inside and I worried, of course, that the gift card meant that I had no idea what he wanted for Christmas.  But that worry only lasted a moment.  I think he is the better judge of what he wants at this point in his life.  A gift card is perfect.

I went to the post office on Friday and stood in the very long line.  I also sent cookies that Lucas made for everyone in really cool cookie containers.  I sent the Christmas card to Jake wondering what he will get with his gift card.

Tonight he messaged me for the first time in a few months and he thanked me for the card and money and we joked for a moment about what he might buy with it.  I read the text message over and over and realized that it is those little things that are important now.

Everyone knows I wear my heart on my sleeve and I am an open book.   Sometimes it takes me a while to get past certain events and figure out what I need to do next.  It was a tough year with Joe Dying, Jacob leaving and Greg and I breaking up all within a six month span.  I feel like I have become quite mental.  I still wake up nearly every morning from strange dreams that just don’t help to start off my day.  I wake up angry and sad and disappointed…

Up In The Attic

I spent much of today up in the attic.  We have the long 4 inch wide spaces in the ceiling where there used to be wall and we have nothing to attach pieces of drywall to.  I am sure that the pros would say to take down the whole ceiling and do it the right way, but I think that if I can place wood spacers between the rafters, we can do this.

While in the attic, I measured each space, Mom cut the pieces of wood and passed up metal brackets and the drill and screws.  I screwed the wood in with brackets and placed the wood pieces every couple feet.  The end result is we have all we need to attach some drywall pieces in place to patch up the ceiling.

Of course, spending a few hours in the attic, getting covered in insulation and dust was not the most fun. 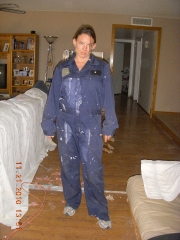 Mom is doing the taping and mudding.  I bought some nice round corner bead for the corners for a smooth effect.